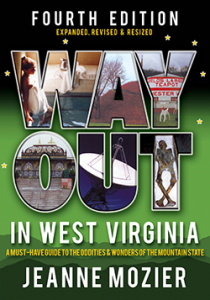 Way Out in West Virginia, a Must-Have Guide to the Oddities and Wonders of the Mountain State, is THE book about West Virginia.

Released in December 2013 in an EXPANDED • REVISED • RESIZED 4th edition.

Way Out was voted BEST BOOK ABOUT WEST VIRGINIA and Jeanne received the Favorite Author nod.

“No one ever accused me of being secretive, and I’m not about to start now. The intriguing land and friendly people of West Virginia have stayed hidden from view long enough. I want more people to discover that, sometimes, wild and wonderful can be a little weird.”
– Jeanne Mozier

“Even though hundreds of people tell me they use the book to plan their trips around the state,” says Mozier, “it’s not in typical guidebook format. People can sit down and just read it and that’s what thousands of them do. Once they read it, they know more about West Virginia than anyone.”

The book’s 17 chapters range from Adventure Driving and Great Plumbing to Fast Living, Remarkable Collections and Unusual Places to Stay.

The Superlatives chapter notes more than 60 places attractions and tidbits that are among the first, largest and just plain special in the world. Mozier’s favorite is the Truly Incredible chapter where things went that could be nowhere else from Mothman and the Greenbrier to the Palace of Gold and the Mystery Hole.

Web addresses for more than 700 listings in the 50 page index.

Great reviews for Way Out!
“Jeanne Mozier is a character who likes talking and writing about characters…her humor gives the book a kind of personality that many books of its kind lack.”
— Washington Times

“The breezy, rambling Way Out in West Virginia reminds me of the fictional Hitchiker’s Guide to the Universe. You can almost open it to any page at random and find strange – and strangely useful – information, in this case about a state whose borders, not to mention its voting residents, consistently defy straight-edged rulers. Mozier’s descriptions and photos of more than 600 of the state’s ‘wildest and wackiest’ sights, sounds, tastes and smells are unabashedly fond – but often funny, and filled with insider advice and asides.” — Washington Post

“Way Out in West Virginia” by Jeanne Mozier is easily one of the most enjoyable books about a state I have ever read. This one gets a solid A.